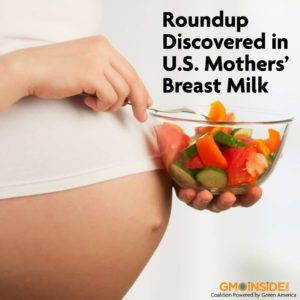 Roundup® in US Mother Breast Milk

Three years ago a 2014 pilot study found disturbingly high levels of the herbicide RoundUp ® (Glyphosate) in the breast milk of American mothers. Three out of ten women tested back then tested positive for glyphosate contamination. The results made it clear that glyphosate levels actually built up in women’s bodies over a period of time.  The levels of the herbicide glyphosate was around 1,000 times higher than that allowed in European drinking water to be considered safe.
ATTENTION  ” MEN “
The Organic Consumers Association reported that Glyphosate was found in urine of 93 percent of Americans tested.  This 2015 public testing project carried out by a laboratory at the University of California San Francisco (UCSF).  The average level of Glyphosate detected was 3.096 parts per billion (PPB). Children had the highest levels with an average of 3.586 PPB. The regions with the highest levels of Glyphosate in urine were from the West and the Midwest with an average of 3.053 PPB and 3.050 PPB respectively.  Also it is important to note that Glyphosate residues were not observed in any tap water samples tested. Equally disturbing is that Glyphosate levels were just as high in city dwellers as they were in agricultural communities where the Glyphosate was being sprayed on crops. 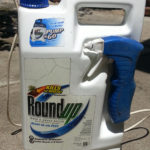 Men who have used RoundUp ® (Glyphosate) in the backyard know that it kills everything that it is sprayed on.  It definitely is not something you want to spray on anything you plan on eating.   Right on the container there are warnings to call a poison control center immediately and seek medical attention if swallowed.
For thirty-five years Monsanto the maker of RoundUp ® (Glyphosate) has claimed that: “If ingested, glyphosate is excreted rapidly, does not accumulate in body fat or tissues, and does not undergo metabolism in humans. Rather, it is excreted unchanged in the urine.”  But the extremely high levels found in breast milk throw this “alternative fact” out the front door.

Monsanto holds the patents to many genetic modified crops being planted across the United States and Canada. A good example is the soybean.  This GMO soybean has 93 percent of the market in North America.  So if the entire circle represents all SOY grown in the USA and Canada.  Then if what you eat contains Soy or is made from Soy then odds are that you have been consuming Roundup. 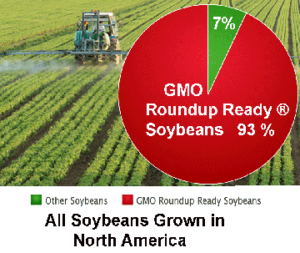 Soybeans are not the only GMO (genetically modified) crop in North America.  Potatoes, tomatoes, corn and rice are also big time GMO.  So is rapeseed (canola oil).
What we need to remember soy was not a part of the human diet until 1979 when the first soy milk was introduced into the grocery store. Prior to this it was a product that was not considered fit for human consumption.  Henry Ford used it as a lubricant in his automobile industry.
Soybeans have another unique quality in that they are a very high source of plant based estrogen.  Yes estrogen the female hormone. This is also a concern for men as it does not help to maintain a stable testosterone level. Published studies have shown that the consumption does have an undesirable effect on testosterone levels. Testosterone, an essential male hormone, helps men to retain and build a more muscular  physique.  In addition it helps a man’s libido or sex drive.
Many studies confirm that cancer has skyrocketed in the past fifteen years. “Research has been done in the United States, Canada, Europe, Australia and New Zealand investigating possible links between glyphosate, Roundup’s active ingredient, and cancer. A large number of studies have focused on glyphosate’s possible association with non-Hodgkin’s lymphoma.” The research shows that Roundup is linked to a host of cancers including both B cell lymphoma, and to brain cancer.  The gold standard for scientific proof is a randomized controlled trial, which would be unethical as it would definitively measure exposure and related cancers.
The government isn’t protecting us.  Despite studies linking exposure to the chemical with diseases including cancer. In 2013 the EPA actually approved the amount of allowable glyphosate in oilseed crops such as flax, soybeans and canola to be increased from 20 parts per million (ppm) to 40 ppm, which is  over 100,000 times the amount needed to induce breast cancer cells. Additionally, the EPA has increased the limits on allowable glyphosate in food crops from 200 ppm to 6,000 ppm.
In looking into the background of Monsanto ones learns some disturbing ties to the health care industry.  At one point the Pharmacia Corporation owned Monsanto in 1999.  Pharmacia is the same corporation that took over the famous Upjohn Pharmaceutical company.  If fact Monsanto had it’s own medical research division that came up with that great drug Celebrex which the FDA warned of increased risks of cardiovascular-related side effects, such as heart attack and stroke.  Pharmacia quickly sold off Monsanto and the new Monsanto became a company in 2000.  Monsanto then accepted an offer of $66 Billion Dollars from the medical giant Bayer in 2016.  This deal is still pending regulatory approval.  Both companies have been meeting with President Donald Trump and now spokesman for the President claims that Monsanto and Bayer promised to keep all of Monsanto’s 10, 000 US workers if approved.  Spokesman for Bayer has not confirmed and did admit the reduction of administrative positions here in the US.
One company makes you sick and the other manufactures and profits from products for your failing health.  Ironically a creepy partnership that should concern everyone. 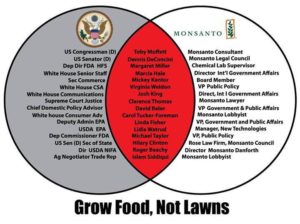 This picture shows the Democratic Conflicts of Interests and Monsanto.

This Monsanto deal is definitely not a GOP Republican thing.  The following image shows the Democratic ties to Monsanto.  And let’s not forget Mrs. Clinton was a Monsanto Attorney. 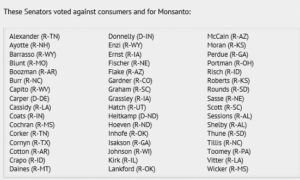 Also we can see a very bipartisan mixture of Senators who voted against the American consumer and for Monsanto.

My first exposure to this was Memorial Day weekend 2014.  I was sitting there and reading about American women finding RoundUp ® (Glyphosate) in there breast milk.  As I read further the article discussed men and urine samples that also had disturbing detectable levels of  RoundUp ® (Glyphosate).  I started to wonder if I too might be eliminating RoundUp ® (Glyphosate).  Despite choosing organic and non-gmo produce I wondered if I was actually being sold actual organic and non-gmo products.  Well I ordered the test kit via the internet (cost $140) back then.  When it arrived I sent it off to a lab in St. Louis, MO.  Luckily my results came back negative.  Since then I have been following this topic as I seriously was disturbed that developing infants were being forced to consume contaminated breast milk.    How could any infant develop a healthy brain being exposed to RoundUp ® (Glyphosate)? The answer – they can’t.
In 2015 urine and water testing was organized by The Detox Project and commissioned by the Organic Consumers Association.  The results of that test reported above. The Organic Consumers Association stated that: “These test results highlight the massive failure of U.S. regulatory agencies, including the EPA, USDA and FDA, to protect us even as they continue to perpetuate the myth that low-level exposure to glyphosate is harmless. We must bring down this poison-for-profit model and build in its place a food and farming system that regenerates and heals, before it’s too late.”
What can you do?
Visit The Health Research Institute and order a kit:  https://health-research-institute.net/glyphosate/
Well at this time there is The Detox Project at the following link below:
https://detoxproject.org/glyphosate-testing-test-yourself/

The urine test for Glyphosate can be found here:  https://www.greatplainslaboratory.com/glyphosate-test/